Doublespeak: A Chrome App for the Orwellian Web

tl;dr: Doublespeak is a new Chrome web extension that replaces political doublespeak with plain English. It's open source so you can help expand the dictionary of terms.

George Orwell is well-known for introducing the terms "newspeak" and "doublethink" in his novel 1984. A portmanteau of the two, doublespeak, is more common in our modern lexicon--and unfortunately, so is the term that it represents. Another of Orwell's works, "Politics and the English Language," explains doublespeak using examples that seem almost quaint today (1946):


In our time, political speech and writing are largely the defense of the indefensible. Things like the continuance of British rule in India, the Russian purges and deportations, the dropping of the atom bombs on Japan, can indeed be defended, but only by arguments which are too brutal for most people to face, and which do not square with the professed aims of the political parties. Thus political language has to consist largely of euphemism, question-begging and sheer cloudy vagueness. Defenseless villages are bombarded from the air, the inhabitants driven out into the countryside, the cattle machine-gunned, the huts set on fire with incendiary bullets: this is called pacification.

Although Orwell is gone, the problems he describes are not. If anything, doublespeak has gotten worse in this age of "rendition," TSA security theater, and PRISM.

Tim Lynch addressed this problem in the context of the War on Terror in 2006:

Lynch goes on to list several examples: "stop-loss" orders as a stand-in for conscription, the replacement of warrants by "national security letters," and the renaming of Guantanamo prisoner suicides as "asymmetrical warfare."

A--perhaps the--key point of Orwell's conception of doublespeak is that words have meaning. Although this runs counter to postmodernism, it points out that language is a key front in the battle for 'hearts and minds.' Witness the recent discussion between a well-spoken University of Wisconsin student ('Madiha') and an on-campus recruiter for the NSA:


NSA RECRUITER 1: I’m focusing on what our foreign intelligence requires of [us], so...you can define 'adversary' as [an] enemy and clearly, Germany is not our enemy, but would we have foreign national interest from an intelligence perspective on what’s going on across the globe? Yes, we [would]. MADIHA: So by "adversary", you actually mean anybody and everybody. There’s nobody, then - by your definition - that is not an adversary. Is that correct? NSA RECRUITER 1: That is not correct.

Doublespeak has the power of the state behind it, which includes a great deal of technological sophistication. Until recently, I was more optimistic about the power of the internet to oppose conventional sources of political power. Although the recent Snowden revelations have diminished my confidence in technology as a political force, we can still use it as a tool to take back language.

To that end, I have developed a simple tool that you can use to counter doublespeak in your web viewing experience. It known as Doublespeak and is available as a Chrome web extension. Right now it has a small dictionary of three terms that it replaces, but can easily be extended for more. The code is also open-source on Github. When you install the extension, clicking its icon in the browser window will open a duplicate of the current page in a new tab, but with doublespeak terms replaced by their plain English equivalents.

Here are a few examples of the Doublespeak extension at work on these three pages: 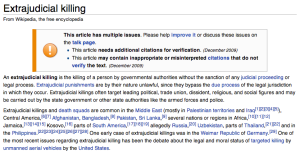 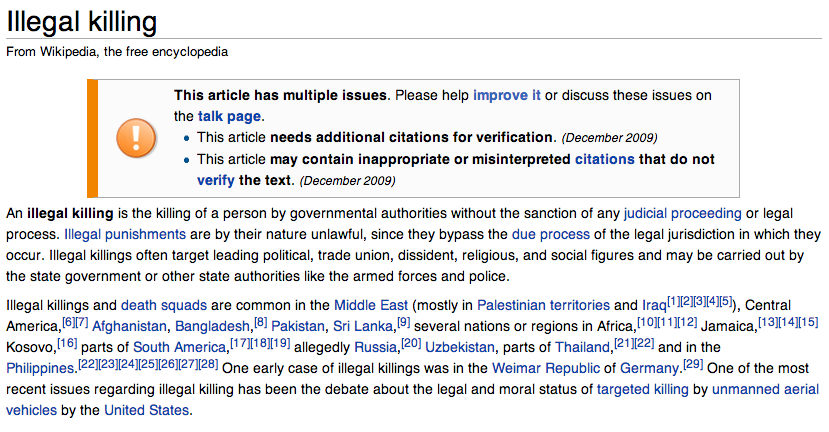 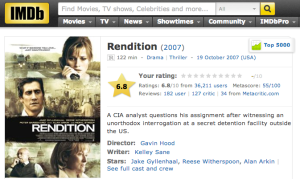 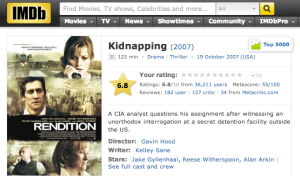 Obviously it does not replace the text in images, but I think that makes the last example all the more striking. The extension should respond to titleized words, but some other special cases (e.g. all uppercase) are not handled in the current version (0.1).

If you have suggestions for new additions to the dictionary or other features, please let me know.
Posted by Matt at 4:00 AM No comments: